Monday evening was another walk at One Of A Kind pets.   Today was a day where I was pretty sure that I was going to show up to walk someone new, and I was right.  It felt like a good “big dog” day so that’s the room that I headed to with a pocket full of treats.   I walked in and started going on down the line.   There were a few dogs that just didn’t seem all that interested in walking with me.   Then I got to the run where Sable was staying.   This guy was at his door with a look that said “pick me, pick me, pick me”.   I hooked up the leash, and off we went. 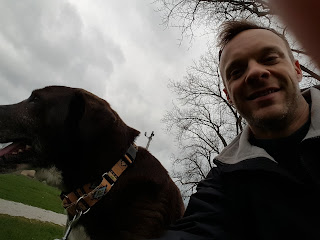 There was a new walker in the group so Sable and I showed them the way to the park.  Drake was the other dog's name and he was full of all sorts of tricks.   Drake was a complete ham and would do just about anything to earn a treat.   Sitting, shaking a paw, jumping, the list went on and on.   Sable on the other hand wasn’t into tricks.   He didn’t pull on the leash.   He knew when it was time to go and when it was time to stop.   Really, he was just happy to be out and about for a bit.
After a while, Sable and I were on our own and having a good time just walking in random directions.   His nose was the leader of the whole parade as it searched out the next great discovery.   As we walked, I started to really study the guy that’s on the other end of the leash.   I’m no good with dog breeds and I’ve never really felt that it’s mattered much.   He’s furry.  He’s nice.   He had a bit of a “hitch in his get-along” towards the end of the walk.   He loved the walk, but I think that he liked laying in the grass and getting scratches more.
Rudy taught me many different lessons.   One of which was how to be attentive.   I’m glad he did as it really let me see what Sable wanted to do while we were out.   Sable wanted attention.   He wanted to be outside with someone.   He wanted to hang out.   He wanted a buddy.   He wanted to stop to relax, enjoy some good company, and just watch the rest of the world.
I’m very used to the very active style of life that Irving and I have.   Last week, we covered 27 miles in 4 days together with a combination of hiking, walking and running.   Sable is just as intense, but in totally the opposite direction.   He was excited, but for a slow walk, some time in the grass, and a good belly rub.   As I watched him, I don’t remember seeing one time where his tail wasn’t wagging.   Walking, lying down, just hanging out, whatever the occasion, he had this smile and a happy tail.   I really enjoyed hanging out with that big, loveable ball of fur.
Sable showed me that it’s not always about what you’re doing, but who you’re doing it with.   We have different interests, but I think that’s why we made such a great team.   We are open to learning from each other.   Sable opened my eyes a lot on this, and I’m thankful for that.

Be open to those around you.   Their differences may give you a new perspective.
Posted by Unknown at 6:40 PM