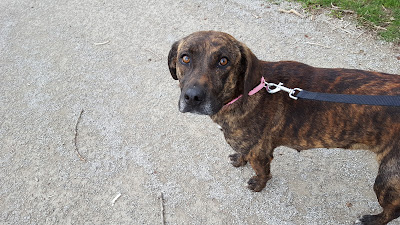 Today I got the chance to hang out with a new pooch named Brynn.   After just a few minutes, I reached the conclusion that you’d be hard pressed to find a sweeter dog anywhere.   It took her a little while, but she eventually was able to teach me something this evening.   Ironically enough, it took so long not because of the teacher was bad, but the student was a little slow on things.
It started out as a normal dog walk.  I show up and look someone that appears as if they’d be willing to teach me something.   Once I find that pup, we head out for a walk.   Shortly after I walked in, I saw Brynn.   She had a “pick me!” look to her, so on the leash went and off to the park we went.
Things started out a bit rough for us as she ran into my left leg about 8 times before we were even out of the parking.   I was trying to figure out if the dog was trying to trip me or what was going on.   Finally, I get the bright idea that maybe she wanted to walk on the other side, so I switched her over to my right side.   Problem solved.   At this point I’m thinking, “Maybe I am starting to figure this stuff out.”   That should have been my first clue that I was going to get it all wrong.
We headed to the park that we walk and made a solid lap without too much of an issue.   I notice that as more dogs came the park, the less interested Brynn was in walking.   I kept trying to get her keep walking, but she wasn’t interested.   A few minutes later, I noticed that  she was shaking a bit.   I’m not sure if it was from the cold or if she was afraid of something, but she wasn’t interested in much of a walk anymore.   I wasn’t really sure what to think at this point.   She didn’t really want to move in any direction but south, towards the shelter.   All that kept going through my head was “she should want to walk, no?”.    Realizing that she just didn’t want to walk much anymore, we headed back.
As she got into her cage, she gave me a look that said something to me.   I’m not really sure what it was, but I knew that Brynn wasn’t ready to call it a day yet.   I asked one of the shelter workers “Is there a place where we can just hang out?   Like a room or something?”   There was a grassy patch just across the parking lot that would do fine I guess, but we didn’t make it that far.   We ended up hanging out on the back step.   Having treats.   Having hugs.   Having attention.   She loved it.   A lapse in petting would yield a paw across your arm to let me  know “Hey man, you’re not done behind the ears there….”
I started to understand this.  A walk is a nice time.   It’s great exercise, and it’s good bonding for some people.   Brynn needed more than that.   She needed someone to make a big deal over her.   She needed that love.   She needed that attention that I’m pretty sure has been lacking.   She needed to be the focus.   When she became that focus, we both seemed to feel better.   It made sense.   I couldn’t figure out what the problem was for Brynn and I at first.   As soon as I focused on her and the attention that she needed instead of just walking, she lit up. 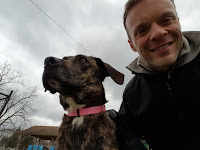 When we went back into the shelter, Brynn went into her cage with ease.   She was ready to call it a day.   She got what she really needed at that point.   The attention that lets her know that someone cares for her.   She just needed to feel loved.
I left feeling a bit torn.   I failed to listen at first so I squandered a fair bit of time trying to put a square peg in a round hole.   On the flip side, we had a really fun time together just hanging out.