Support for a different perspective

Christmas day I spent time with some friends at Grace Park.   Since my first involvement with the Akron Snow Angels, the group has expanded my circle of friends farther than I had ever imagined.   I really look forward to meeting up with my friends...to go visit my other friends.   For a sheltered kid from the country, it’s been a wonderful experience and has opened up my thought process on almost everything that I do.


My Christmas has always involved a morning trip to my folks house to open a few gifts a first.   After that, my mom cooks a meal that you typically eat until it hurts...and then you have a  few more bites just because it’s that good.   A few weeks ago, I told my mom that I wanted to do the Christmas mission with the Akron Snow Angels.   In the back of my mind, I was wondering how the holiday would work with me doing this though.   Being a small, but very close family, we have our routines.   We have our traditions.   Without a hesitation, everyone adapted to work around the plans that I had.   As soon as I heard how willing everyone was to work around my schedule for the day, the first lesson dawned on me.


Lesson one: The people that truly care will find ways to support what you’re passionate about. 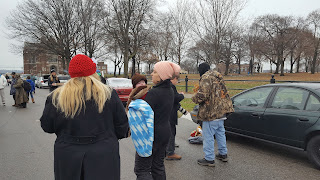 The trip to Grace Park was a bit different for me this time.   I didn’t really have anything that I needed to take care of.   Instead of taking requests, I got to walk around, mingle, and just generally chat with people.    At first, I didn’t really know what to do.   As soon as I saw my friends Mike and Jared, it all became pretty easy.
“Hi Mike!  How are you?”.
“Fighting a bit of a sinus issue, but I’m doing good.   How about yourself?” he responded
Mike lives in a tent in a wooded area in Akron.   Let that sink in for a second.   He lives in a tent.   In the woods.   In the city.   On Christmas.   ...and he says things are good.   This is why I think I like talking with Mike so much.   There’s never really a negative word.   He’s nice, genuine, and polite.   Mike is always just a pleasure to talk to.
If you looking for someone that has a library's worth of facts stored in their head, Jared is the guy that you want to talk to.   He’s always full of energy and always working on some small practical joke to get a smile out of someone.   Needless to say, you’re hard pressed to find someone that’s not a fan of Jared.
Lesson two: Perspective is everything and the situation is exactly what you make of it.


In this holiday season, I’m grateful to be in a position where I have people around me that support me and my passions.   I am also really glad that I have friends of all walks of life.   These friends make me laugh, and make me realize that those laughs are the most important thing.

To all of you, my most sincere thanks for making this holiday season a special one.
Posted by Unknown at 3:30 PM No comments:

Any place. Any time. Any situation

Today was the day where a year's worth of hard work for a few individuals turns smiles and granted wishes for a neighborhood as Elves & More of Northeast Ohio takes off to deliver 1,100 bikes.   In fact, today’s deliveries created 3 neighborhoods filled with smiles.
I was honored when I was asked if I wanted to head up a bicycle delivery with my friend and longtime Elves and More supporter, Lenny Raushcer.   I started to wonder where we were going.   I knew that it would be the Akron area, but I didn’t know which area.


Yesterday that question was answered when I was told “our group is going to Norton.”   I was completely shocked.   I didn’t really know what to say.   How could that be?   I live in Norton.   I don’t see the things normally associated with the neighborhoods where Elves and More goes.   I was filled with questions as to why we were going to Norton of all places.   It didn’t make sense to me.
People always ask me, “Where will the delivery be this year?”.   I always tell them “I don’t know” as usually, I don’t.   I’ve been asked before, “Aren’t you curious?”.   My response is always the same.   “Nope” I say.   “I know that they do a lot of work in figuring out who can really benefit from the bikes.   They’re smart about this.   There’s no need for me to know.   I just know that we will be getting bikes to kids who need them.”
As I went to bed that night questioning why we were going to Norton, I realized that I needed to tell myself the answer that I tell everyone else when they ask me where we are going.  “The guys in charge are amazing at finding the right people to get the bikes to.   They know what they’re doing.”


Lesson one: If there’s a proven process, trust it. 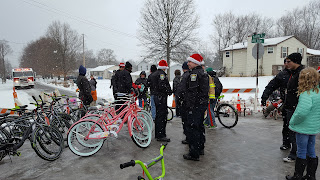 We all have a tendency to live inside of our own little worlds.   It seems that many people barely know their own neighbors, let alone someone that lives 4 or 5 houses away.   For me, it’s taken an effort, but I take great pride in being involved in my neighborhood.   When I walk the dog, I usually get stopped by a few different neighbors to catch up on things.   I help out my neighbors when they need it, and they are always willing to reciprocate without hesitation.   We all talk.   More than that, we communicate.   We check on each other.   We laugh with each other.   We genuinely care as we are not only neighbors, but friends.
The neighborhood we were in today felt like it didn’t have that sense of “community”.   There were no negative feelings, but people very much seemed to keep to themselves and not  interact with each other.   I feel as if I was part of breaking down some of those walls today.   Kids riding bikes brings people out of their houses.   It gets them talking.  It brings them closer.   Being a part of a community makes everyone stronger.   The whole becomes greater than the sum of its parts.   I feel that we have planted that seed today.


Lesson two: Communities don’t “happen”.  They need a catalyst to get them started.   Be that catalyst 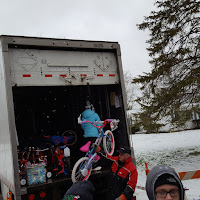 
Lesson three: People that need help can be found in any place, at any time, in any situation.

Today had three valuable lessons for me. Two I had to hunt for. One was obvious. I'm already excited for next year....
Posted by Unknown at 2:08 PM No comments:

Two missions with the Akron Snow Angels this year, and both had snow.   Coincidence?    I highly doubt it.   It’s a tough mix of emotions to deal with when you’re thinking, “I’m cold and hope that we get done soon so I can get inside where it’s warm” when you’re out helping people that have no inside to go to.   It is a dichotomy that I always seem to wrestle with.
After loading up, we headed to the North Hill High School parking lot for our first stop.   Many of the people that we worked with that this place may not have been homeless specifically, but when you see a child walking around without a jacket or even socks in the snow, you know that you’re helping people that desperately need it.
It is my understanding that North Hill is now an area that is setup for refugees from other countries.   I don’t know their stories, but I am curious to learn more about them, what their country was like, and how they got here.   Often times, when we would try to speak with the people, there was difficulty in communicating.   The kids often spoke some English but the parents largely did not.   It’s emotionally difficult to have someone right in front of you that needs help, but language barriers make it difficult to find out what specific help they need.
I did find that two things that work in any language.   Socks and coffee.   On a cold day, if you hold a hot cup of coffee in your hand and extend it towards someone that’s shivering, the universal smile communicates that what you’ve done just made someone’s day that much better.   The same thing can be said for a pair of socks.   When you see a child in the snow with shoes but no socks, all it takes is an outstretched hand with a pair of clean, dry socks to change the outlook for everyone involved.   It’s these vehicles that we use as a group to open the lines of communication to help all of us learn more.
This is yet another culture, another dimension, another group of diversity within our local area that has an outlook on life that I have not dealt with much.    I am anxious to learn more.  I’m excited to make more friends.
Lesson one……   Caring knows no language. 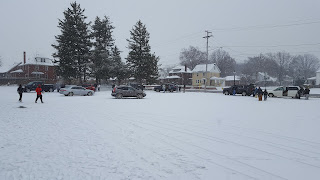 As we loaded up and left North Hill, we went to our second stop of Grace Park to see those friends that we’ve had for a while now.   I love being the request guy as I really affords me the opportunity to get to know some of the people and talk with them.   My interactions are usually short, but I always make the effort to make them personal, personable, and fun.    Today, I met a man named David.   David is probably about 6’7”.   He was in a light jacket and tennis shoes.   Cold, but smiling.   He politely asked if he could request a heavy winter coat and some winter boots.   I looked at him and asked, “You a medium?   About an 8 boot?”   After we got done laughing about it, David let me know that he needs a 4XL winter jacket and a size 14 boot. He’s tremendously tall, and has the heart and laughter to match his stature.
Lesson two…...laughter warms up everyone.

Later on in the mission, a gentleman named Derrick came up to me to request some boots and a coat.   My pen and my hands started to malfunction a bit from the cold and I ended up writing his first name in some unrecognizable hieroglyphs.  I scratched his first name out and put it on the line below.   He saw this and very politely asked me if I could put his last name on the same line so there was no confusion.   The first thing that went through my head was “why does it matter?   I’ll be the one going through the sheet later.   It’ll be fine.   No problem.”    Then it struck me.   It appealed to some of my own obsessive compulsive/leave nothing to chance tendencies.   If I was depending on these items for my survival, wouldn’t I want to make doubly sure that there was no confusion?   You can be sure that I would be triple checking with the person.   I would do everything in my power to make sure that things go well.