Some people would argue this about me, but I often struggle with what to say to people.   When working with the homeless, how do you start a conversation?   What do you say?   It’s tough to figure out common ground.   Politics are too polarized at the moment.   I’m not up on the latest in the entertainment world.   Most homeless people aren’t really into the latest automotive news.   What am I going to say to someone?
I know that I’ve mentioned this before, but I always try to make requests feel better than “just another line” for people to go through.   I don’t have much time, but I always want to do something to make sure that the people I talk to feel like people instead of a list of items on a sheet of paper.   Even though I’m not always sure that I get through in that form, I always want to make the effort.   Today, I was shown why that effort is worth it.
I took a request from a gentleman today for some boots.   He was a taller, slender man carrying a backpack, a few items he had picked up at other vehicles, and a travel mug of coffee.   His jacket was this bright, royal blue color.   A bit dirty, but a color that bright is tough to hide.   His stainless steel travel mug had two bright blue stripes on it, the same color as his jacket.   When I asked him if he planned it that way, he gave a loud laugh and said “this isn’t even my favorite mug.   I lost my favorite but ended up with this one.   I think I kinda like it now.”
We made a few jokes and had some big laughs about being fashionable and “gotta look good all of the time” before we parted ways.   As he turned to leave, he had a huge smile on his face.   I saw him look at his mug, then his jacket a couple of times as he walked away with a touch of a skip in his step.   I’m pretty sure that he had a new favorite mug.   I get the feeling that his outlook on the day, and his mug had changed a bit.


Lesson one: It only takes a small connection to start a big reaction.


Knowing who I am, I realize that in public situations, I become very aware of my surroundings and those that are in it.   That doesn’t mean that I catch every detail of every conversation, but it does lend me to hear and see things that others often do not.   Today, this awareness fed me two bits of information that still have me smiling.
Through the two seasons that I’ve done missions with the Akron Snow Angels, I’ve seen a lot of faces.   Some have been different, and some have been the same.   There are those that we see time and time again that are stuck.   For whatever reason, unable to get traction to change their situation.   In some cases, they may not want to change their situation.   They’ve become comfortable with the uncomfortable.   I’m still very happy to help those people.   I don’t know why they may be stuck.   They may not even know it.   In the same sense, it may not even be their doing.   For me, I just enjoy knowing that I was able to help make their day a bit better.
On the opposite side of that, there are people that may be spinning their wheels, but aren’t necessarily stuck.   Sometimes, there just needs to be a little bit of a push to help get un-stuck.   Today, I overheard two separate people today mention that they had either moved into or got news that they were getting housing.   In working with the homeless this is the best news to hear.   These are people that aren’t stuck.   It’s such a huge step in the right direction for people.   It’s not the end of the battle, but it’s the biggest step towards getting to what most of us consider a “normal” life.   I’m excited for these people.   I wouldn’t mind talking with them again.    I’m also glad that I won’t have to.


Lesson two: Pay attention. Good stories are out there if you’re listening.

Hearing those two stories today puts a quote into my head….backwards.
One small step for mankind.   One giant leap for a man.   (or two)
Posted by Unknown at 5:33 PM No comments:

I’ve been on two missions with the Akron Snow Angels since my last blog post.   Why haven’t I posted?    It’s not because I didn’t learn anything.   It’s been quite the opposite.   For me, I’ve wanted to look at things from a different perspective.   I wanted to see things with a different mindset.   I wanted to let other approaches take over for a bit and see where they lead me.   In all of this, I’ve learned a lot about myself, and people in general.   As for the mission, there were two things that seemed to stick out for me today as I talked to people.   Both points came to me from totally different levels….literally. 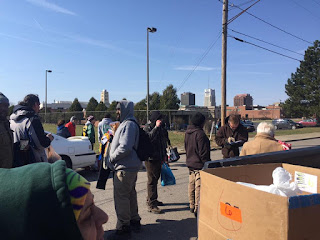 My first lesson was very much in my face.    Actually, I had to kneel down for it to be in my face.   In the picture, I’m talking with a gentleman named Michael.   According to those close to him, Michael was really excited to talk to me and tell me exactly what he really wanted.   Michael wanted shoes.   A size 3 kids shoe.   When I asked him what color he enthusiastically replied with, “It doesn’t matter, but I really like blue and red.” 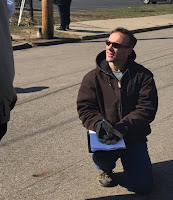 I’m not sure of his story.   I’m not sure of his parents story.   I do know that Michael is a neat kid.   He’s bursting at the seams with personality.   He’s got a winning smile and happy-go-lucky attitude in a less than ideal situation.   I can honestly say that Michael made my day today.
As a young child, Michael has a simpler view of the world than most of us.   In getting me back to the basics, this young man reminded me of something that I need to do more on a daily basis.

Of recent, I’ve found myself using one word in the english language more than any other, and it’s become extremely helpful to me.    The word “why” has been my guiding word of late.   As people, it’s our natural tendency to ask the “who, what, where, when”, and just file that information away.   As I’ve started to dig into the “why” of things, I’ve been able to diagnose problems rather than just look at the symptoms.
It seems like so many people see a homeless person and assume that “poor life choices” are the reason as to why that person is living the way that they do.  If you only ask the who, what, where, and when, then I get why you’ll come to that conclusion.   When you start to ask why they made some of those choices, that’s when you really start to learn about these people.   That’s when it finally clicks as to how we can truly help people.   When you keep asking “Why?”, you’re able to break things down into solvable problems.

Lesson two:   Continually ask “Why?” if you want to solve problems instead of symptoms.


It’s been a little over a year that I’ve been going on missions with the Akron Snow Angels.   I feel like I’m just now reaching a new understanding of what is happening, and how we can move to make things better.   All of this because I am continually asking the question “Why?”   I suggest that you do the same.
Posted by Unknown at 5:02 PM No comments: