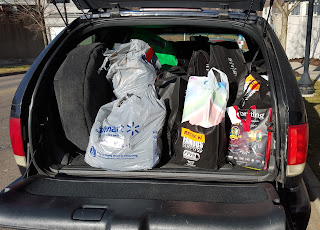 A blur.   That’s the only way that I can describe the mission today for Akron Snow Angels.   I was part of the request vehicle again.   That meant that the day started out with seeing how much compassion could be crammed into a 2 door Blazer.   Apparently, it can hold a lot more than most would think partially, because it comes in different forms for different people.   One pair of size 11 work boots can hold a right foot, a left foot, and the brightest hope for the job that can lead to a better situation.   A large pair of long johns and a knit shirt can hold 10 degrees of happiness on a chilly day.   A Batman toothbrush and toothpaste can make a child have a size 82 smile.   The Blazer could carry the tangible items.   A fleet of ships couldn’t come close to carrying the feelings.

The first stop was just down the road to a smaller group .   Even with it only being my second visit to that site, I feel a personal connection with some of the folks there.   The feel is very much “some friends are stopping by to chat for a bit.”   We just happen to be the friends that drop off some much needed supplies at the time also.   It really is a comical bunch of folks that we get to hang out with.   Eager to talk.   Eager to share stories.   In need of the laughs.

As we arrived at our second stop, I spotted Johnathon right away.   I was excited.   I had two pairs of pants for him, a nice insulated shirt, and a pair of boots that will keep his feet warm and dry.   I caught up to him and we chatted for a few.   He is adapting.   He doing what he can to get through this.   It’s not an easy road, but he seems to be staying between the lines.   It was good to see.

I saw Lee today but unfortunately didn’t get the chance to say hello and shake his hand again.   I am kicking myself a bit for not doing so and I’m making it a point to do so next time.   Seeing him again brought about a bit of a contradiction of feelings.  I want to see familiar faces so I know that they are ok and so I can share the laughter with them.   I hope that I never see them again as I hope they have the shelter, heat, food, and clothing that they need.   Emotionally, it’s a wild ride.

What did I learn today?   I learned two things:

1. Big problems are solved with simple steps in the right direction.
I saw a child smile because toothbrushing now involves his imagination and a superhero.   I saw someone gain a world of hope.   I saw someone less worried about freezing.  I saw a lot of people laughing and sharing in conversation.   These simple things can be the things that help solve much larger problems.

2. I guess I should have paid more attention in math.
It’s in my nature to want to put a measurement to things.   Maybe my high school math teacher would be disappointed, but I need help with this problem.
Solve for x
x = hope + 10 degrees + size 82 smile