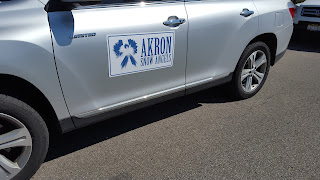 Whenever I go out with the Akron Snow Angels, there are a ton of positive things that come out of every mission.  You can’t help but feel good when you hand someone a few needed items.   You get varied reactions, but a high level of gratitude.   I’ve discovered that the gratitude isn’t necessarily because you gave them something tangible.   In many cases, it’s because you’ve given them one less thing to worry about.   In other cases, you’ve given someone the slightest bit of comfort in a very uncomfortable world.   It’s a powerful and wonderful feeling.   I suggest that you try it.

Unfortunately, Saturday’s lesson came via a few pieces of news from within the community that were a bit disturbing.   As I write this, I’m not sure what percentage of angry, upset, and sad I’m feeling, but all of those emotions are currently stirring around at a rapid pace
As we left for the day's mission, it was mentioned that there had been a fire and a few tents were lost to it.   This is tough to hear, but at that point, there is a certain amount of anonymity that allows a person to feel distant enough to stomach the news fairly easily.   As the day went on, there became two more bits of information that were discovered later that are much more difficult to digest.
The first piece of news that we heard was that there is speculation that the tents being burned was an act of arson.   Other than someone intentionally setting the fire, there wasn’t another known source of ignition nearby.   Hearing that it was intentionally set, this is where my brain starts acting like a curious 4 year old’s and asking the “why” question over and over again.   Why would someone do this?   Why?   Just why?   Why could this have possibly seemed like a good idea to someone?   Personally, it’s the questions that I can’t find the answer to that I find are the most difficult to deal with.   “Why” happens to be one of them in this case.
News always carries more weight when it hits close.   Later in the day, we found out that the two people that lost their tents in the fire are well liked in the Akron Snow Angels group.   Friendly, chatty, and even a bit witty.   Each has a distinct personality of their own.   They are tough, but approachable.   Unique, but unassuming.   If you start a conversation with them, you’re going to end up with a good laugh.  If you get something for them, they both show their extreme gratitude in their own, unique way.   One with a handshake that could crush a rock and the most sincere thank you that you’ll find anywhere.   The other says “thanks” with a shy smile and a slight turn of his head.   You can tell he’s truly grateful, but he isn’t always quite sure how to handle it.   How is it that these two guys lost everything?
It’s always tough to figure out what really happened.   I’m not a professional detective and much of what I have heard about the events leading up to this is speculation.   “Why” isn’t the right question for me to be asking.   It is tough to steer away from that as wanting to answer the big “why” question is a huge part of what makes us human.   It’s how we figure things out.   It is what we use to discover things.   It was later on when I realized that the more productive question that I need to be asking starts with “how”.    How can I help?

You can only get the best answer if you’re asking the right questions.
Posted by Unknown at 5:57 PM