Being the first mission, with some new volunteers, from a location that we moved into just a week ago, you would think that there would have been some hiccups in the process.    To be honest, things went amazingly smooth and that can be attributed to the beauty of volunteer group.   Everyone is there because they want to be there.   They want to reach that common goal.   As long as the general mission is known, the smaller jobs seem to quickly fall into place.   I find that every time I get involved in something like this, there is a lesson that can almost universally be applied.   People make the difference.   It can be one, or it can be hundreds.   It’s people that make the difference. 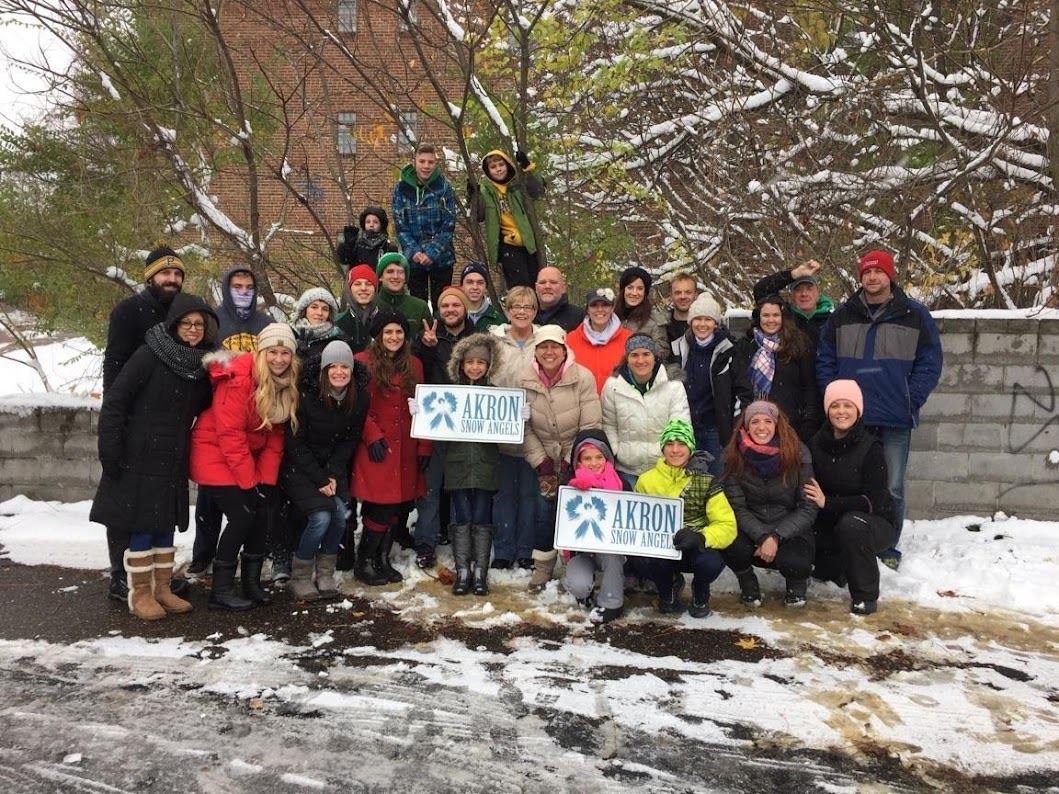 It’s the end of November, so it’s the beginning of the season to #spreadthewarmth and start working in the field with the Akron Snow Angels.   It seemed all too fitting that the night before the mission is the first snow of the season.
To make sure that the warmth was spread, two people were panhandling within sight of the parking lot where we sat.   Erin, the founder of the Akron Snow Angels, took a small group over to deliver some meals and other items to those people.   To do the most good, you have to get out there and do things, and this is a wonderful example of that.   Imagine having to panhandle in the freezing cold and the snow while watching so many cars pass by.   Then, to have a small group approach you with some warm clothing and a hot meal.   That’s hope.    That’s motivation.   That’s fuel.   That’s so much more than the tangible items.
From North Hill, we headed back to the usual spot between Grace Park and the Haven of Rest.   I was the “Request Guy” today as it’s a position I have come to really enjoy.   I get to talk to a lot of people and get the opportunity to give them a bit of personal warmth.   If someone was making a request, I always tried to ask for their name first.   I wanted to connect, and calling someone by their name who doesn’t often hear it is a good initial step.   These people matter, but don’t often feel like they do.   That is the change that I wanted to bring with me today, and I felt that in many cases I was successful.
Nearing the end of the day, I had just 2 or 3 people left that wanted to make a request.   As I was talking with them, I noticed a gentleman pacing a bit behind the group.   He had an energy about him, more out of awkwardness than anything.   He appeared to be outwardly nervous, but not scared.   It intrigued me.   Finally, it got to be his turn to make a request and he introduced himself as Ronald.    Right at that moment, someone turned back and interrupted us with no regard for what was going on so they could add to their request list.   What impressed me during this what how Ronald handled the situation.  When interrupted, Ronald just stepped back and patiently waited…..paced….but waited.   He had no angst.  No anger.  No grudge.   He knew that I’d still take his request.   Ronald is in a world where you have to compete to survive, but he knew at that point that he didn’t need to compete.   He knew that his needs would get met.   I took note of this and it made more sense as to why later.
Lesson #1 is obvious.   It’s just been reaffirmed today.   “People make the difference.”
Lesson #2 was taught to me by Ronald.    “Pick your battles, for you may not know what consequences an battle not worth fighting may bring”

The second lesson is one that I have had a tough time with in my life.   People that know me know that I have a tendency to go “full throttle” at everything.   Today was a much needed reminder for me.   Thank you Ronald.
Posted by Unknown at 4:14 PM